Teaching your child to cycle.

A parents guide to a fun and stress free ways to teach your child to cycle.

As part of my research in to the Parents Guide:Teaching your child to cycle, I interviewed lots of parents and asked them about their experience, what their challenges were and what worked for them.

I started with my friend Kelly who had recently taught her boys to cycle.Kelly and I have worked together for nearly 10 years and I knew that she would be willing to tell me the honest truth and I also had a hunch that her story would help to inspire other parents to do the same. 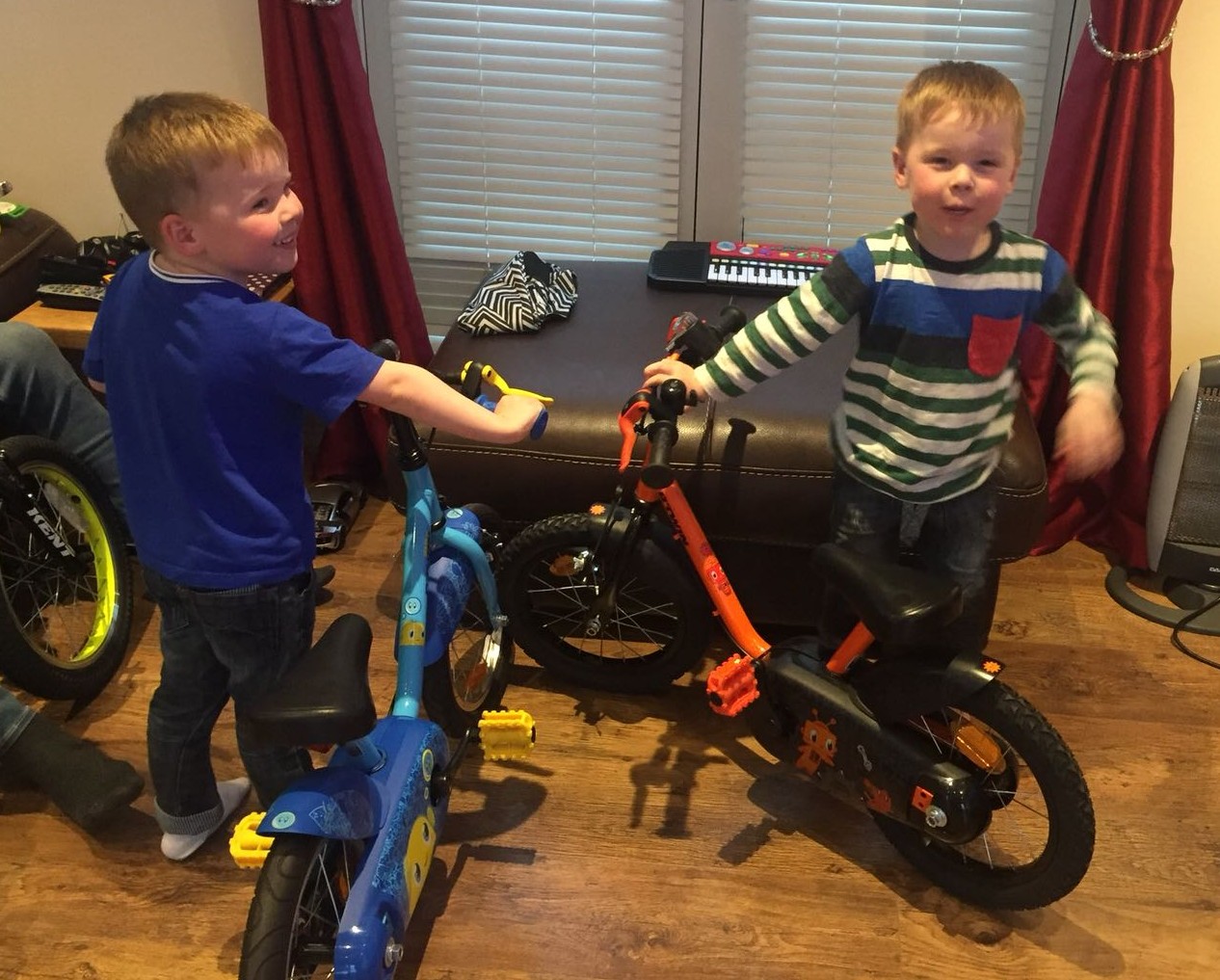 Kelly has had the benefit of having already taught her first son to cycle but has the added challenge of having 3 year old twin boys! Below is our conversation which I hope will give you some insight into how some parents may approach teaching their child to cycle.

So Kelly how did you approach teaching the boys to cycle?

"They had their balance bikes; I started them early about 2 years old. We are outside a lot as a family and the boys always wanted to be on their Balance Bikes."

Why did you decide to introduce pedalling and when?

"After about a year, they were so confident on the balance bikes that I knew that if I could get them excited about going faster by pedaling they would give it a go. We had been on longer walks recently and the boys were keeping up so I knew their strength was improving. We had bought them new bikes for their birthday, which of course gave us an ideal deadline."

How did you do it?

"I actually put them on stabilisers first as their new bikes came with them attached. Also, with two of them I just felt happier knowing they had a bit more support and that they would be successful on their new bikes immediately. After a couple of months I thought, they are ready! So we took the stabilisers off and they got it (almost) straight away. A few wobbles here and there but they were off." 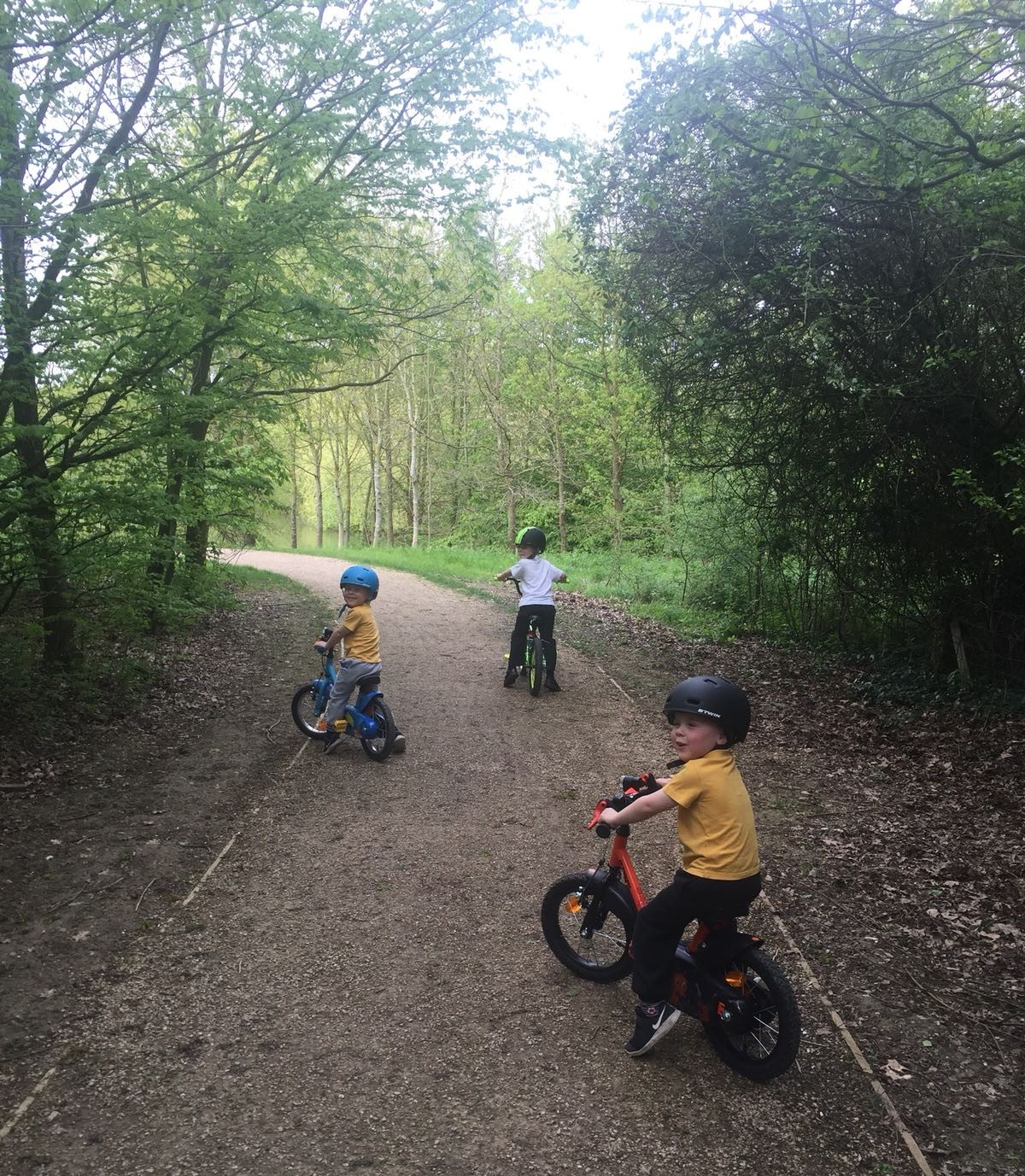 Why do you think your boys took to it so well?

"I think having good core strength and balance is really important, when I do my training at home the boys try and do it with me. They can hold a plank and do lunges with me. I didn’t need to push them onto pedal bikes as we started on balance bikes really early and they were still young, plus they were having so much fun on the Balance Bike."

The main reason Kelly was successful with her approach was how in control of her boys learning she was. Kelly knew that by starting early with basic balance exercises she was helping build the foundations for the boys physical development, she also positioned herself as their role model for physical activity. Secondly, Kelly had thought about the stages of learning and had an idea of how the boys would progress, she had set realistic timelines and she created a learning environment that was relaxed and seemed like a natural progress with parent and child both consenting to take the next step.

Kelly had built trust, was in control and became the confident instructor!

As a child I was very active, playing either football or rugby, cycling or digging big holes in the garden. One of my earliest memories is the day when I finally learnt to ride a bike. I was riding the bike of all 3 year olds dreams, a Rayleigh Streetwolf with built in sound box, Black with red trim. I was in my back garden and I can remember my Uncle Ian’s dulcet Romford tone “Ger un Ger un, I got ya” we must have completed 100 laps of the of the badminton court sized patio garden. Then, as I turned around the washing line in front of me, I could see him, which meant he wasn’t behind me, nor was he holding me up, which meant I was riding on my own! I was so excited I rode straight over the steps falling over the handlebars on to my face. I couldn’t believe I had learnt to ride and had my first crash “Brilliant”.

When I reflected on this memory I wondered why it was my Uncle and not parents or even grandparents that I remember helping me to learn to cycle? I quizzed my mum about this, she laughed out loud, bemused. She said “we spent hours at Bedford’s park running behind you, don’t you remember?” to be honest I didn’t but to save her feelings I said “Yeah, I do actually”. As a natural detective as most Mum’s are, she could tell I was lying and this awkward situation, sparked my imagination and has helped develop my new business idea.

As the Manager of an Olympic standard cycling venue I must have seen thousands of children learn to ride but it was only following the conversation with my own Mum did I start to look closer at the sessions we deliver and how the adults bringing the children interacted with the session. One particular session we deliver, works like magic, in just 30 minutes we have turned children completely in tears reluctantly pushing their bike with stabilisers to confidentially weaving in and out of cones at full speed totally unaided (stabilisers or human).